AGF: Fic Battle 2.0 - Let your guard down, this is stuff you need to know 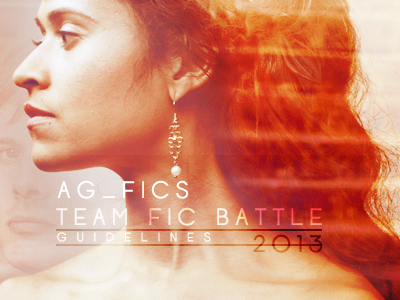 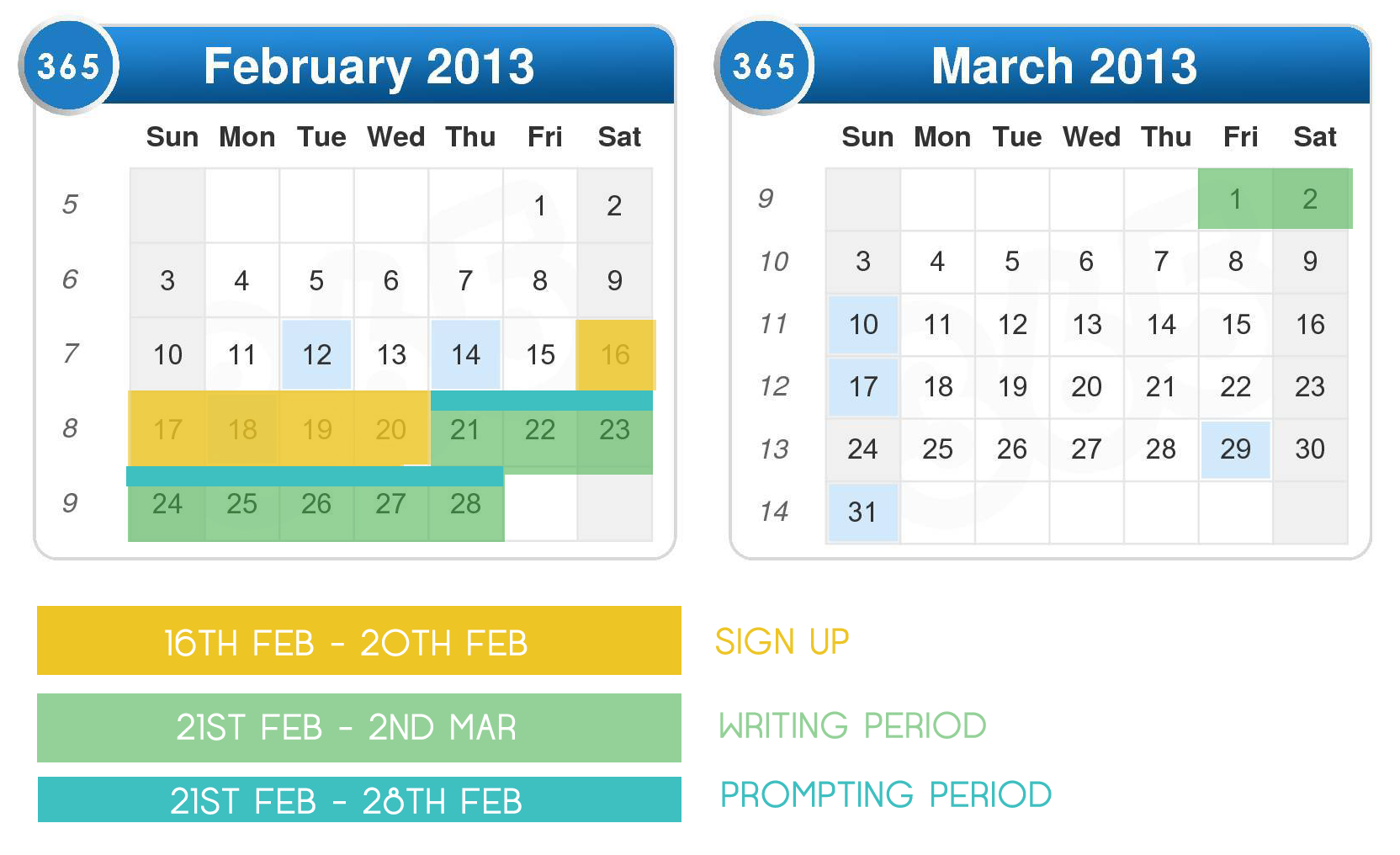 >click calendar for massive version<
Welcome to the Guidelines for what is technically Mini Challenge SEVEN, but will more commonly be known as

ag_fics's first Team Fic Battle (and then later as WHATTHEHELLHAPPENEDTOFEBRUARY). If you were with us for the last one (omg, you came back) then you know we're all in for a spectacular show of spunky determination and sharply wavering sanity. I can hear you Prompters cracking your knuckles already, but cool your jets, let's go through the Guidelines first. Please read below carefully and if you have any questions - ask me, I'm right here waiting.

[Note: I'll be adding in Countdown clocks for all the dates/times - but just for the moment fixed times aren't available, because when we begin depends on when whether we reach Wednesday or 13 Players first]
TO BE AN PLAYER (AUTHOR): First you need to sign up on the Sign Up post. We can have a maximum of 13 Players. So, first in best dressed.

TO BE A PROMPTER: You literally need to do nothing right now (except read this post). Twiddle those thumbs. Make up some lists. You already know who's interested in playing from the poll we took earlier - might as well make the most of it.

[Note: Players can be Prompters too. In fact, it will make the Challenge better if some of your opponents are the ones giving you the prompts. They can help you win, or they can watch you lose. Secretly, I'm sure they'd enjoy both.]

!IMPORTANT! - Once the Writing Period starts, before you do anything please remember to track your Team Post. Click the 'Push Pin' icon up the top of the post. You're not going to win if you're unaware of new prompts.

+ There are no Challenge Themes, for the first time in a long time. Go nuts.
+ Anon comments/fills will be screened.
+ All fills must list: Title - Character(s)/Pairing(s) - Rating.
-- example: Changing like the weather - Arthur, Gwen, Merlin, Morgana - R
+ All fills must be commented in reply to the prompt that inspired them.
+ Depending on how many sign up there will be between 3-4 people per team, each grouped by me.

1. You may only fill prompts left on your Team's Post. When the prompting period ends there will be a small window when you can steal away and fill prompts from other Teams (even if they've already been filled) - and have them count towards your FILL TALLY. By 'steal away' I mean copy the prompt and paste it above the fill you write for it, on your Team's Post. Both Stolen Prompt and Fill must be in the same comment.

2. Your team must fill the first five (5) prompts in the order you receive them. Your first five (5) can be filled by any or all team members; if you want to set your fastest writer on them, go ahead; if everyone wants to pitch in, also good. The first five must be prompts from three (3) different people. See Team Hippopotamus for an example.

3. Each fill should be at least 250 words. You can write more if you want to.

4. The aim of this Challenge is to get the highest FILL TALLY. Team Members must cooperate, working together to defeat the army of prompts left for them in the time available. Also: to try and drown their opponents in prompts.

6. Surviving Teams will be the teams who complete ALL their prompts in time.

7. MVP (Most Valuable Player) will be awarded to the Player from each Team who writes the most.

8. A prompt can be filled more than once, but it will still only count as 1pt towards your FILL TALLY. You can't get more than 1pt for a prompt even if your Team fills it a hundred times.

9. There will be a single Questions/Random thread at the beginning of each Team post. Any prompts posted above it will be screened. So please wait for it to appear before prompting.

10. Squee is most definitely allowed. But only the Team members who 'own' the post can reply to the prompts on it. Eg. Team Giraffe members are not allowed to reply directly to prompts left on Team Hippopotamus's post and vice versa. All squee/flail must be connected/replied to fills and other comments.

!IMPORTANT! - You ONLY get four (4) unfilled prompts per Team post. So spend them wisely, it might be a while before your prompts are filled and you can prompt again. So don't do them all in one go, maybe limit yourself to 2-3 per post at first, as you'll be getting ideas as we go along. Ideas you'll want someone to write for you.

1. Yes, you can be a Player and a Prompter, the two aren't mutually exclusive. But you cannot prompt your own team.

2. Once one of your prompts has been filled you can prompt that Team again.

3. Prompters are not allowed to explicitly specify who on a team should write their prompt. If you name someone it will be screened.

4. Keep it to one (1) prompt per comment. TEXT prompts only, no pictures, no vids.

5. Prompters, once your prompt is commented you have one minute to check it over for spelling/grammar/typing mistakes. After that you must leave it alone. We can't have you editing your prompts while people are trying to write them. (Maybe try reading your prompt before you comment it.)

6. Please, read the Team's preferences before you prompt. Prompting baby!fic from three people who don't write baby!fic isn't going to go over wel - and they will be completely within their rights to ignore your prompt.

7. Any prompt that clearly goes against the entire Team's preferences will be discounted if it is left unfilled at the end. Teams will not be penalised for a Prompter not reading their preferences carefully enough to know better, and no points will be deducted.

8. If your comment isn't a prompt, it needs to be connected to something. No floating comments. See above to Dot point 10, under To the Authors. I'm aiming for at least some order in the chaos. So if you want to say something that has nothing to do with anything, comment it to one of the Questions/Random threads. That's what they're there for.

9. When we get to 'stealing' prompts from other Teams - in a little 24hour window that I'll make you all well aware of when it's almost upon us - you will be able to 'steal' prompts left by your own team members. But you will not be able to 'steal' your own prompts back, they're gone. You can't have them. You gave those ideas away.

10. I can't think of a ten. Let's use our imaginations and pretend there's something here.

- PLEASE DO NOT delete your own comments. Please ask a Mod (me) to do it. Only delete if you've replied to the wrong comment.

- If you see something that violates the rules, let a Mod know.

- If you want to say something super privately you can PM me.

- If you want something clarified, you're probably not the only one - ASK. QUESTION. FROWN. Waiting until you're hip deep in prompts with one of your teammates metaphorically slumped up in a corner rocking and muttering, while the other snags all the good prompts before you can shout MINE...is probably a bad time to wait to ask a question. But if you want to wait til then that's cool.

- Players, maybe one of your Team should be the one who understands the rules, another can make lists of the prompts, and the third can...uh...keep everyone buried in prompts (while sticking to the 4 per Team rule) in between filling prompts?

- BTW, exactly how you divvy up the prompts your Team gets is your business. It can be whoever gets there first. It can be through an agreement that so and so #1 get's all the angsty ones, and so and so #2 gets all the crack and the last so and so get's everything in between. It could be rock, paper, scissors. It could be a number thing, one of you takes every third prompt, another takes every second prompt, etc. It could be a mix of things. Does it matter as long as your Team survives and has fun doing so? Nope.


MESSAGES THROUGH TIME FROM PEOPLE WHO LIVED* THROUGH THE LAST BATTLE, AND DIDN'T LOSE ALL HOPE:

Lists. WE ALL NEED LISTS. NOT JUST THOSE PRETEND ONES EITHER.

Be prepared that this will disrupt your work life and after it is over, you'll find yourself scrambling to complete work you neglected for this. Also, no one IRL will understand this.

1) Definitely would write shorter fics, but some prompts required a good deal of brainstorming.
2) Why did I sign up for smut when I know how long it takes me to write smut.

* Try thinking more widely on a couple of the prompts. Angst is giving me trouble at the moment, and the prompt I interpreted as angsty therefore didn't get done before the deadline (though I finished the fill the next day); maybe, if I'd tried getting more creative with it, I wouldn't have had so much trouble and would've actually survived the challenge.

* Don't get sick during the challenge. (I was mostly unconscious all of Friday and couldn't think straight when I was awake. :P)

I would tell myself to not get caught up in reading other people's fills (and commenting) and do my own first. To just have fun and give all my prompts a go!

Drink more TEA!!! Have more prompts! I kept running out. I should have spent less time doing other things than writing. I also got a bit wordy on a few of them.

Be a survivor at all costs! Don't read fills until after the challenge ends and map out the story carefully! Don't watch TV, lol.

First time's good to have fun, see what you can do and how you can improve.

Make actual lists of what plot lines work with which genres and etc, that way that can help keep all ideas and such in order. Also find time to do work and write and get enough sleep. :)


* Lived maybe, but alas some of these wise souls did not end up 'surviving' their prompts. A list of Survivors can be found on the MC6 Winners are Grinners post. Hopefully our returning heroes will have better luck next time. I want to call you zombies, coz you perished and now you're back but I won't...as long as you survive this time, yep you can consider that Challenge issued. I know I said the other post was a WIP but I'm a fresh post kinda girl, so I'll link it. It's easier in the end.
Tags: +mod: mustbethursday3, .challenge: mini (guidelines/rules), .challenge: mini - battle flavor
Subscribe